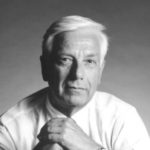 Mauro E. Mujica has been Chairman of the Board and CEO of U.S.ENGLISH since January of 1993. Mr. Mujica, who himself immigrated to the United States from his native Chile, has a firsthand understanding of the obstacles facing non-English speakers upon their arrival in this country. His insight into the linguistic isolation of non-English speakers and his determination to help tear down these barriers made him a perfect successor to the late Senator S.I. Hayakawa, who founded the organization in 1983.

As part of his efforts to increase the visibility of U.S. ENGLISH, Mr. Mujica has appeared on hundreds of television and radio programs including, “Good Morning America,” “60 Minutes,” “Lou Dobbs Tonight” and various shows on Fox, CNN, MSNBC, PBS, BBC, Telemundo and Univision. He has spoken on the importance of English at numerous college campuses and in front of several state legislatures. Mr. Mujica’s leadership has increased the organization’s membership from 165,000 in 1993 to over 1.8 million members today.

Mr. Mujica is a naturalized U.S. citizen. He holds a Bachelor’s and Master’s degree in Architecture from Columbia University and is an Honorary Member of Emmanuel College at Cambridge University, England, where he studied architecture, art, and the Middle Ages. He is fluent in English, Spanish and French, has a working knowledge of Italian, and is currently studying Russian.

An accomplished businessman, Mr. Mujica is a partner and investor in several international firms in Europe and the United States, with company interests ranging from architecture to real estate, investment banking and the arts.

Looking for the most current happenings at the Foundation? Read all about our exciting news, most recent developments and latest stories here. You can also access a "Free English Language Learning Resources on the Internet" brochure here.

The U.S. English Foundation offers access to free English language lessons via U.S.A. LEARNS, an educational resource for adult immigrants who want to learn or improve their English skills as they become part of American society. Create an account with U.S.A. LEARNS for FREE.